This latest article by Meryl Batchelder is on World Pulses Day which is celebrated on the 10th February. Before you switch off from what could be conceived as a particularly uninspiring international event, with almost 8 billion people to feed in the world, it seems high time the nutrient-packed legume should be placed on a pedestal and championed.

Putting Pulses on a Pedestal

The United Nations has around 180 observed international days that occur each year; from the 4th January and World Braille Day to the International Day of Epidemic Preparedness on the 27th December. Most events relate to significant global issues such as health, education, social justice or the environment. So, why on Earth does the UN want us to celebrate the unpretentious pulse, or legume, this February for World Pulses Day? Pulses are simply the dried, edible seeds of plants cultivated for food such as beans, lentils or peas, and it’s easy to understand why many people might not find them quite alluring enough to honour.

For Planet and People

Despite their simple appearances, we should really consider those little, dried seeds as a staple food of the future. Foremost, pulses are a fantastic source of protein; lentils contain the same amount of protein per 100g as beef. If we then consider the water demand, it takes over 15,000 m3 of fresh water to produce a ton of meat from beef cattle, which is the equivalent to six Olympic sized swimming pools. This is around five times higher than the water needed to produce a ton of lentils. In a world with increasing pressure on fresh water reserves, a lower water demand is a real advantage of growing pulses.

The farming of animals to provide meat for humans to eat is also contributing to climate change. In addition to deforestation to produce crops for fodder, the methane that ruminant animals, such as cows, produce is a far more potent greenhouse gas than carbon dioxide. Per gram of protein, beef emits 20 times more harmful emissions than pulses such as beans and lentils. To put just 100g of protein on your plate, beef production emits around 50kg of greenhouse gas emissions.

As the planet warms, climate change is going to affect our food security. Drought is already causing famine in areas of East Africa such as Kenya and Madagascar and even the corn-belt across the North American continent is suffering from changes in precipitation patterns, resulting in lower yields. Many crops are specifically grown for animal feed. As a food chain lengthens, there is more wasted energy. Eating plants has a higher efficiency than eating animals that are fed on plants. Put simply, farming of pulses enables a greater food security than reliance on farmed animals.

In addition to their high protein content, pulses are low in fat and rich in soluble fibre, which can lower cholesterol and help in the control of blood sugar. The WHO recommends eating pulses to aid the management of diabetes, digestive diseases and heart conditions as they have a low glycaemic index (GI) which slows the rate at which the energy they supply is released into the bloodstream. Pulses have been shown to help combat obesity; the high fibre content makes them very filling which makes appetite control easier. They also provide a significant source of vitamins and minerals, such as iron, zinc, folic acid (vitamin B9) and magnesium.

The nitrogen-fixing properties of pulses improve soil fertility, which increases and extends the productivity of agricultural land. By using pulses on rotation and for intercropping or cover crops, farmers can promote farm biodiversity and soil biodiversity, while keeping harmful pests and diseases at bay. This means pulses can reduce dependence on the synthetic fertilizers used to introduce nitrogen artificially into the soil. As greenhouse gases are released during the manufacturing and application of these fertilizers, their overuse can be detrimental to the environment.

In the UK the pulses which many children only come across are mushy peas (dried peas that have been soaked, boiled and mashed - often eaten with fish and chips) or tinned baked beans which could also be considered pretty mushy. In fact, there is a whole world to discover of incredible foods. Staples dishes and cuisines range from smooth, garlicky hummus in the Mediterranean (chick peas), spiced Indian dhal (peas or lentils), crunchy Middle Eastern falafel (chickpeas), coconutty Jamaican rice and peas (kidney beans) to tangy frijoles refritos Mexicanos or Mexican refried beans (usually pinto beans). During lockdown, my family travelled to the far corners of the map without getting on a plane simply by cooking vegetarian world foods. The tastes and textures of different cuisines can delight the taste buds and also go easy on the wallet. In the days of rising inflation, buying large bags of dried pulses means plenty of affordable, healthy food.

Promoting a pulses with children

Although the number of vegetarian children is increasing in schools, many still consider beans as unappealing. Why have a bean burger if a beef burger is available. However, the earlier you introduce young people to the delights of beans and lentils the more likely they are to embrace and enjoy them. My daughter recently did a science project on eating insects; Year 5’s were absolutely keen to try them, Year 8s were reticent and adults were particularly reluctant to put a cricket or meal worm in their mouths.

Here are some ideas for introducing children to the joyful world of pulses in school:

·        Grow plants from dried peas and beans and then study parts of a plant. Celebrate the ability of plants to make their own food by photosynthesis that can be then used to address world hunger and link to SDG2, Zero Hunger.

·        Investigate the environmental benefits of plants from reducing demand on fresh water (link to SDG6, Clean Water), to the reduced green house gas emissions (link to SDG13, Climate Action) and the advantages to soil health from nitrogen fixing bacteria.

·        Study the benefits of pulses to a healthy diet (link to SDG3, Health and Wellbeing) and teach pupils how to cook with pulses in food and nutrition.

·        Bring example world foods containing pulses into school and link to global citizenship and other cultures – hummus and pita bread is perfect. Then study which countries grow and export pulses in geography.

·        You could make collages celebrating pulses in art or use beans or lentils in shakers for music.

·        Read Jack and the Beanstalk and then support children to write their own creative or world stories about a lucky lentil or Hap-pea.

·        Green is good, so introduce green options (vegetarian/ pulses) alongside red options (fish or meat) on the school canteen menu.

Pulses are, by their very nature, humble. Teachers and educators can raise their profile by singing their praises. The more we bring them into the lives of young people the more they will be accepted and appreciated. So, for people and planet, on this World Pulses Day join the celebrations by sharing the beauty of beans, the power of peas and a love of lentils.

Keep your finger on the pulse:

·        UN International Day of Pulses including videos and links

·        The Gaia Foundation has a wealth of resources on seeds, food and climate resilience.

·        On a slight tangent, Bayer Labs are running a ‘design a labcoat’ competition as part of British Science Week for primary and secondary pupils on food waste and food production. Deadline for registering is 31st March 2022. 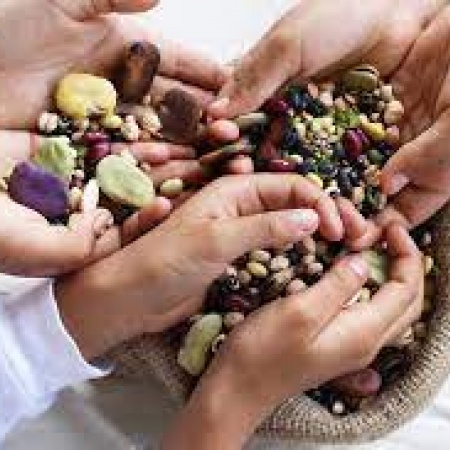