Home» About Us» News and Updates» STEAM Powering toward Gender Equality

The 11th February 2020 marks the start of the UN Assembly for the 5th International Day of Women and Girls in Science. Meryl Batchelder describes why the sciences appealed to her and why, although there has been considerable progress in attracting women to scientific subjects, we still need to continue strive towards gender equality in both schools and the workplace.

We start with a note on STEAM

Within this article I will refer to STEAM (Science, Technology, Engineering, Art and Maths). Until recently I was an avid proponent of the acronym STEM rather than STEAM. My logical thought processes believed that STEM was adequate and the addition of an A for the Arts made no sense. However, the climate activism movement has changed my opinion. We need the A in STEAM to help draw on design principles, encourage creative solutions and to communicate ideas.

Almost no progress was made within the public forum by climate scientists over 30 years of research until Greta and Extinction Rebellion came to centre stage with their colourful placards and painted signs. The drama, music, costume, dance and art used by many environmental campaigners has been integral in engaging with wider communities and attracting attention to the climate cause. STEAM now seems more appropriate now and into the future.

I always knew I was going to be a scientist. My earliest memories are when my friend and I gathered ingredients from the kitchen cupboards, bathroom cabinets and garden shed for our backyard ‘Mixture Parlour’. As children we spent hours working scientifically; measuring powders, pouring liquids, developing potions, changing formulations, reviewing the results before disposing of any failed attempts down the back of the next door neighbour’s shed.

There was more than a little danger involved, such as the time we burned the bedroom curtains with the spirit burner from my home chemistry kit or when we tried to set fire to a big pile of fertilizer pellets (do not try this at home). Our research culminated in our biggest success; we made unctuous, green slime – decades before it became a hit. Whereas my friend was destined to be a student of the arts, I knew my path would lead through the mysterious, engaging and sometimes dangerous route of the sciences.

Certainly I was fortunate in that my father was a physics lecturer and would take me into his university research labs during the school holidays – for a young girl they were magical places filled with awe and wonder. The relationship with my father and that early exposure to university life were responsible for making science accessible to me even though historically STEM subjects were not considered particularly suited to women. Back in 1906, Prof Arthur Smithells of the Chemistry Department, University of Leeds stated ‘Science teaching remains for the most part formal and academic in its scope and completely unsuited to the needs of the ordinary girl’. Luckily, we’ve made quite a bit of progress since the days of Prof Smithells. Much of this advancement is due to some incredible historical figures such as Marie Curie, Ada Lovelace, Rosalind Franklin, Shirley Ann Jackson, Dorothy Hodgkin and Caroline Herschel.

More recently, and the women who most enthused me, are the conservationists and primatologists Jane Goodall, who still inspires young people today, and Dian Fossey, who was murdered for her conservation efforts. Common to many women in science it was the biological subjects they found their passion in. When considering this, Dr Goodall once said, ‘Women tend to be more intuitive and maybe the hard science approach isn't so attractive. The way that science is taught is very cold. I would never have become a scientist if I had been taught like that.’ Traditionally most girls are attracted to the biological science rather than physics or chemistry. This may be partially explained by social belongingness; teenagers feel they are better suited to subjects that have more of their own gender, but they also need to believe they can be successful in the subject. Over the years girls seem to continue to succumb to the stereotype that they are not as capable in the physical sciences or maths as their male counterparts.

According to the stemwomen.co.uk website, in 2018 only 24% of UK STEM graduates were female and 22% of employees in the STEM workforce were women. There seems to be no biological reason for the gender gap in STEAM roles. As Angela Saini writes in her book Inferior: How Science Got Women Wrong, ‘decades of rigorous testing of girls and boys confirm that there are few psychological differences between the sexes, and that the differences seen are heavily shaped by culture, not biology.’ Indeed, in the UK the PISA scores for Science in 2018 for boys and girls are almost identical at 506 and 503 - both genders have very similar abilities. It is the culture therefore that must change.

The drive toward Gender Equality in Science

Gender inequality in science is a global issue and the United Nations recognises that it is important to encourage girls in science. The 11-12th February 2020 is the 5th International Day of Women and Girls in Science with an Assembly in the UN headquarters in New York. The aim is that gender equality, through the empowerment of women and girls, can make a crucial contribution not only to economic development of the world, but to progress across all the other goals of the 2030 Agenda for Sustainable Development. António Guterres, Secretary-General of the UN, confirms that skills in science, technology, engineering and maths drive innovation and are critical to achieving the Sustainable Development Goals (SDGs). Although ‘Women and girls are vital in all these areas they remain woefully under-represented.’

Women form half the world’s population. If we have diversity in research, we can expand the pool of scientific researchers, bringing in new perspectives, talent and creativity. In order to improve health or combat climate change we need to harness all talent. In order to encourage more women to work in science we must try to tackle misconceptions about girls’ abilities and promote access to learning opportunities for women and girls, particularly in rural areas.

In the UK, the WISE (Women into Science and Engineering) Campaign promotes the role of women ‘from the classroom to the boardroom and at all stages in between’. Their short term goal of one million women employed in STEM has recently been achieved and they are working towards a long term vision for gender balance. WISE suggest society will thrive through the contributions women make through prioritising problems to work on and finding better solutions to energy, transport, food production and the other big challenges we all face.

As a teacher, parent or carer, if you accept there is no difference in their capacity then there is every reason to promote girls to choose the sciences at A-Level and beyond. By seeing other people having faith in their ability, they will begin to believe in themselves and have the self-confidence to expand their horizons. In addition, they need to be aware of the incredible range of exciting fields they could become expert in, from aeronautics to zoology, which will be needed to thrive on our changing planet. The employment rate for graduates in STEAM subjects is always higher than the national average, and this looks set to continue.

Girls can be encouraged in science by using appropriate role models or mentors. Many organisations such as STEM Ambassadors or the Institute of Physics can send young female graduates or employees into schools to talk to and inspire teenage girls to consider pursuing STEAM topics. There also are an increasing number of successful women science presenters on TV: Professor Alice Roberts, Liz Bonnin, Hannah Fry or Helen Czerski have a screen presence that rival that of Professor Brian Cox but have a much stronger influence on young girls to realise their potential.

The confidence of girls can be built up so that they are willing to take risks – for example through attending a science club. Giving pupils the opportunity to undertake research projects or CREST Awards in school can be potentially life-changing. Last year, a girls’ team from my Eco-STEAM Club won the Developing Sustainable Communities Award at the National Science and Engineering Competition in the Big Bang Fair. In the North East regional heats of the competition, 12 out of 13 finalists were girls. Looking forward to March 2020, my school has three teams through to the finals – again, all girls, all working on real world environmental challenges. As a science teacher, seeing my pupils do well at a national level brings joy to my heart and hope for the future. It also goes without saying that all pupils will respond positively to any enrichment or exciting STEAM opportunities – we definitely don’t want to put boys off, we just want to attract more girls.

The future of STEAM may be increasingly feminine

Recently there have been a number of inspiring stories about successful young female conservationists in the press. Mya-Rose Craig, known as BirdGirlUK on Twitter, has been praised for making the nature sector more diverse. This month the 17-year-old is about to receive a Doctorate of Science from University of Bristol, she will be one of the UK's youngest recipients of the honour. Another incredible teenager is Amy Bray, founder of Another Way and Cumbrian Woman of the Year in 2019.

Mya-Rose and Amy are not alone. In the past two years it feels as though a revolution has started. On the front line of the environmental and conservation movement are a plethora of young voices. Although there are many boys and young men raising the stakes, the names that appear in the media are overwhelmingly female; Greta Thunberg, Jamie Margolin and Nadia Nazar (cofounders of Zero Hour), Alexandria Villaseñor (founder of Earth Uprising), Vanessa Nakate a climate striker from Uganda and Anna Taylor (co-founder of the UK Student Climate Network) to name but a few. None of these young women may be considered expert scientists but they all have a deep enough scientific understanding of the environmental issues on Earth that they are willing to make a stand.

They are also acting as inspirational role models to future generations of environmental scientists. As Jane Goodall believes, girls often seem to be more intuitive and have more empathy. With the alarm bells ringing for ecological collapse and the climate emergency girls are simultaneously rising up and making themselves heard. Their desire for a brighter future makes them ideally suited to work on solutions to the global challenges using their science skills and qualifications.

On a final note, it is not always plane sailing to become a female working in a scientific field. Admittedly, I have had hurdles to climb. Over the past three decades there have been a couple of occasions of sexism, a few of feeling belittled and many of feeling inadequate – but these could happen in any field of employment. One thing is for sure, there has not been a moment that I have regretted being a scientist. Since those early days of scientific enquiry in the backyard and setting out to become a qualified scientist, throughout my career I have never been bored of my job, I have never stopped learning and science has always felt just a little bit mysterious.

Ask for a visit to your school to promote girls in STEAM:

Ada Lovelace Day is on Tuesday 13th of October 2020 - An international celebration of the achievements of women in STEM. 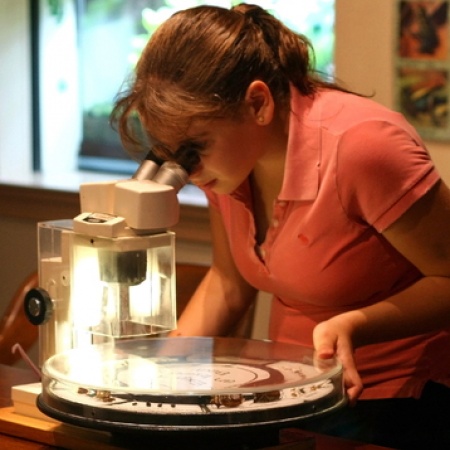